It was National Poetry Day today. I don’t have anything to contribute, sadly, not this year anyway.

Stephen Stratford’s always wry, witty and thinky Quote/Unquote reprinted a 1996 piece on Jenny Bornholdt. I don’t think I’ve read any of her stuff but people whose taste I respect rekkin she’s good.

Elsewhere…the New Zild poet going over a storm right now, Hera Lindsay Bird, was asked to summarise the history of poetry and tweeted about it.

It made me laugh, genuinely, out loud.

Lindsay Bird is welcome for many reasons, one is she uses the word ‘fuck’ a lot and the other being she refuses to be po-faced about poetry.

Given New Zild’s literary scene has been dominated by people bemoaning the country’s dour, puritan culture and being even more dour and puritan about culture, her approach is a gust of fresh irreverence. I hope she maintains it.

I’m probably missing a whole lot of points here. I usually do, about poetry.

Over at Dim-Post, Danyl McLauchlan is marking poetry day by discussing Scottish bard William McGonagall, generally regarded as the worst poet of all time.

There’s a lot of competition for that title: it’s a bit like the Australian Worst Loser Championship.

Spike Milligan did a failed film about him, The Great McGonagall, back in the 1970s. Milligan played McGonagall and Max Miller, as seen here:

The entire film was made in an old Victorian-era theatre Milligan was trying to refurbish and the idea was to raise money for that project. The film spluttered to an end because he had another of his breakdowns, according to one history I’ve read.

It is a shambles, but it’s a weird, compelling shambles. It’s the closest I think Milligan ever got to capturing his bizarre worldview on film:  a mix of tatty music hall, Victoriana (Peter Sellers plays Queen Victoria), bad jokes, and a mocking nostalgia, or a nostalgic mocking, of the British Empire.

The bit with Valentine Dyall as Alfred Lord Tennyson is wonderfully bizarre.

Emma Hart, at Public Address, has a post on the joys of swearing, and like Hera Lindsay Bird, I think it’s fair to say she’s broadly in favour of the activity.

The only thing I’d add is a profound and heartfelt defence of the word ‘arse’  which I feel we are at risk of losing to the awful, anaemic ‘ass’.

In all the talk – most of it pernicious nonsense – about the generational divide in recent times (aside: I wrote about it in NBR recently, if you have a sub,  its here) there is one very large generational gapopening  up and that is the use of  the rather wet ‘ass’ vs. the magnificent ‘ARSE’.

New Zealanders under the age of roughly 35 are using ‘ass’ much more where in the past the word ‘arse’ would have been used.

Honestly, what is wrong with you young people?!

‘Ass’ is a prissy Americanism. It’s not a swear word, its what a swear word wants to be when it grows up, and only then if mummy and daddy say it is ok.

‘Arse’ is a word you can roar in exasperation, fury, or exuberance.  It needs to be preserved.

A Society for the Preservation of Arse is called for, I think.

And finally, on the subject of words and books: tomorrow is the Downtown Community Ministry Second Hand Book Fair in Wellington.

I expect that, as in previous years, it will involve queuing in the rain. And this is what makes me a Wellingtonian, I think.

A city where people queue in the rain for second-hand books is my kind of city.

August 9 is Book Day in the United States. Scanning the 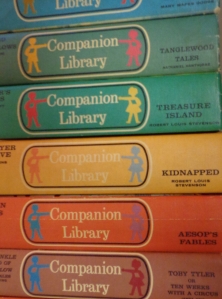 news bulletins beaming out of that strange and excitable outlier*  from the rest of the English-speaking world, it’s difficult not to conclude that a quiet sit down with a long book for a week or two would do American citizenry a power of good.

New Zealand doesn’t have a Book Day. We probably should. We have days for lots of things, including public holidays for provinces which haven’t existed since 1876, and for the birthday of a monarch on a day which isn’t actually her birthday.

We should be able to manage a Stay In Bed & Read Day –  sometime around mid-winter, say.

A few months back I stumbled across a bunch of Companion Library books at a second-hand bookstore in Petone. I don’t know the history to the Companion Library series, but I know it was a cheap way to get ahold of some of the great classics.

They were available on some sort of hire purchase plan, I think.  They were via mail order, and you got one every couple of months or something similar.  There was no actual ‘front’ and ‘back’ to each volume – each volume had two books, and you flipped them over and read in from each end.

They were cheap – all the books were well out of copyright, and I bet even for their cheapness someone was making a packet out of them. The first one my folks got for us was Alice in Wonderland, and I can’t for the life of me remember what was on the other side of that volume.

Had a huge effect – I had vivid dreams anyway, and here was a tale about a very vivid dream.

Aesop’s Fables was also a fave – and I notice now, looking back, that like the Grimms/Andersons volume, it was short stories. The thing I remember most about the Aesop’s Fables was discovering the origin of a few phrases (‘Oh, so *that’s* where “sour grapes” and “dog in a manger” comes from!’).

I presume the Companion Library has long since been discontinued. You can get all these on Kindles now. Probably for free or as close as makes no difference.

Anyway, Happy Book Day, wherever you are, and Happy Reading, on any day and any device.